The president of the college at the time of the Durfee Conservatory construction, William S. Clarke, sought to develop and sustain a continued interest in the new college. Formal professorial lectures and written reports were not enough, he believed. Ingenuity was also required. Unique plant experiments for public display helped lend a notoriety to the practical base from which study arose and proved the practical merit of research in agricultural education. Such experiments attracted onlookers and tempted others to consider agricultural study as a vocation—or at the very least to support its continued existence.

One such special project, which many found irresistible and curious, was Clark's famous weight-lifting squash experiment. Rigged for display in one of the Durfee propagation pits, a giant chili squash was fitted with a special apparatus. This was to be the first known scientific investigation of the enormous force of plant growth. The squash was planted in July 1875 in rich compost; a selected flower was hand-pollinated in August. Framed by boards and iron bands, the plant could only expand by lifting a weighted platform. This required raising a nine-foot chestnut beam to which assorted weights were progressively added in the form of pipes, castings, an anvil, sand buckets, and hogsheads.

Growing rapidly, the squash was probably critically observed by more people than any squash in history. Many thousands of men, women, and children from all classes of society, of various nationalities, and from all quarters of the earth saw it. By mid-October, more than 10,000 had visited the Plant House. One enamored professor, D. P. Penhallow, watched it hourly for several days; another, J.H. Seelye, proclaimed he was in total awe. The exhibition turned out to be an amazing demonstration of the power of plant growth. In the course of its growing, the muscular squash lifted a weight equal to 4,500 pounds. Some days after an accidental cracking of its shell, it supported 5,000 pounds. The mighty squash was knotted and scarred by this Herculean effort. Henry W. Parker, first M.A.C. resident chaplain, penned what would be a gruesome epitaph:

Eventually, Clark called a halt to the experiment. He even received a warning from his five-year-old daughter, who said, "Papa, when you do let that squash loose, it will go for you." By November 7, the squash was ready to be unharnessed forever. This was no easy task, for it had to be laboriously cold chiseled free of its iron bounds. It weighed nearly 50 pounds and had a tough rind three inches thick. The entire root system was assiduously washed and, when measured, found to be over 2,000 feet long. Spectators wondered how such rapid growth and power could proceed silently. No great groans or crunching sounds signaled its progress. It was carefully noted by one vigilant professor that a maximum power was secretly reached just after midnight. A lift of two and one half tons of iron and sand was phenomenal. 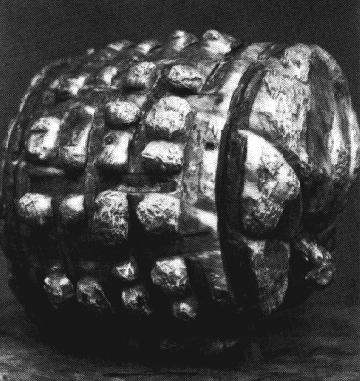 A mammoth plaster cast of the celebrated squash was carefully made and placed for exhibit on the second floor of the Botanical Museum. To Clark's great pleasure, throngs continued to bome and have a look; one more interesting object to astound public visitors and students alike.

An attempt to duplicate but improve on the original squash experiment was made as part of the university's 120th anniversary celebration in 1987. A portable unit made with modern materials and the latest technology was constructed to lift a two-ton Deere tractor. Hundreds of spectators gathered in front of the university gymnasium to witness the event. The media was poised, cameras set, a band played, colored balloons were given out, speeches made and backs clapped. Great success was predicted. With much good humor and fanfare, the anxious crowd watched the chambered squash get squished as the rind cracked in about 50 places. Chagrined professors Les Whitney, Stockbridge Dean Jack Denison, and grower Tom Beauchesne could only offer the following explanation: They had used the wrong squash variety, at the wrong time (spring), with the wrong material design (the airtight plexiglass chamber housing the squash trapped in ethylene gas and may have caused premature ripening and a weakened shell). Ceremonial straw hats were humbly tipped in recognition of the past. Vows to return another day were made. This was a time to reflect and go back to the drawing board. It seems that we still can learn a great deal about patience, plant growth, and the seasons from our early Aggie instructors.