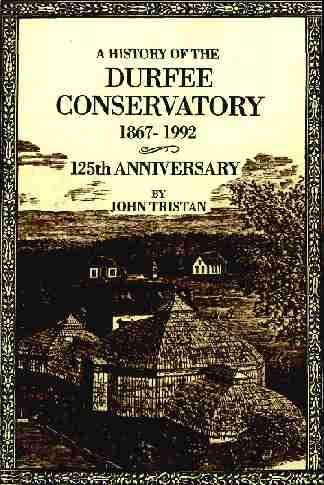 One winter night in 1883, a terrible fire shattered the conservatory's tranquility. Durfee's wooden frame and curved arches were always prey to moisture and decay and ultimately to the ravage of its own heating system. Winter was an especially dangerous and arduous time. The laborious job of warming the structure required a constant tending of a great furnace fire with wood and coal. A small room housing a student or two to handle this round the clock duty was maintained at the back of Durfee. In the darkened and frozen skies of one fateful winter night, a frantic alarm rang out, "Durfee is on fire!" An account of the ensuing events was made by Professor Samuel T. Maynard in an annual report to then President J.C. Greenough. It reads:

"About 8 o'clock in the evening of January 23, 1883, fire was discovered in the work room, but it had gained such headway that nothing could save the building. The students were soon on the grounds, and by the use of light snow, which was abundant, the two wings-the lily and store rooms-and the propagating pits were saved, although the plants within them very much injured. At this time the thermometer indicated eight degrees below zero, and as soon as the flames were under control, stoves were procured, by which means, and covering the sides of the houses with mats-the temperature within was kept above freezing until boiler and pipes would be repaired, which was not until the afternoon of the 25th."

The frantic efforts of students were instrumental in saving many of the specimen plants housed in the badly damaged structure. Throughout the summer and fall of the next year, repairs were made and the bulk of the original collection remained intact. Over the course of the next eight years, renovations and new structures were added. By 1892 the Durfee Plant Houses were almost completely rebuilt, with two entirely new propagating houses. These changes gave the conservatory a new ornamental look.

The structure still contained the remains of one of the original sills in the first octagon, built in 1867. Upright posts replaced the old curved roof and the glass surface area was increased by over 2,000 square feet. Larger glass panels were used, and sash bars made of cypress installed. The whole building was heated by two new Furman hot water heaters.

New storage, tool, and work rooms allowed for areas to be kept to their legitimate purposes. Improved efficiency and less clutter near the boiler were no doubt a consideration in this new scheme of operations. The catastrophic fire of 1883 would not be soon forgotten-or repeated.

This is an edited excerpt from John Tristan's book,
A History of the Durfee Conservatory 1867-1992
Published by Sara Publishing © 1992
All rights reserved.